Thought that some of you would like to see some of the statics from the survey. So here's few pie-charts to light it up. 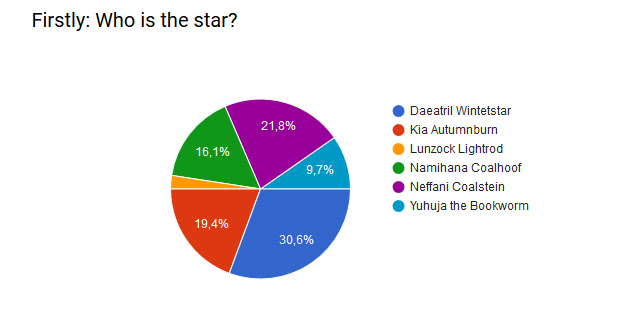 I was rather surprised how the votes went between the girls - even the "cyborg" gnome did get in the end three votes. 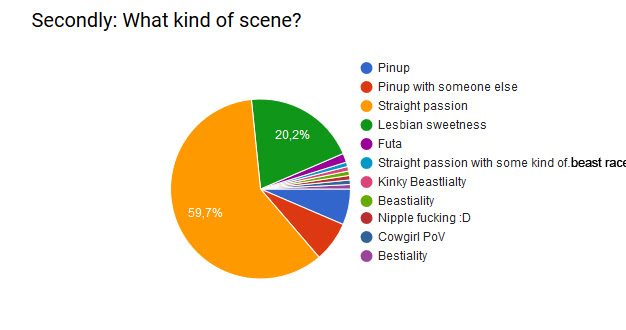 Next we have here are the "scene type". No argument there.
But this is where I should have added own slot for bestiality, as some already did add themself with the free answer. 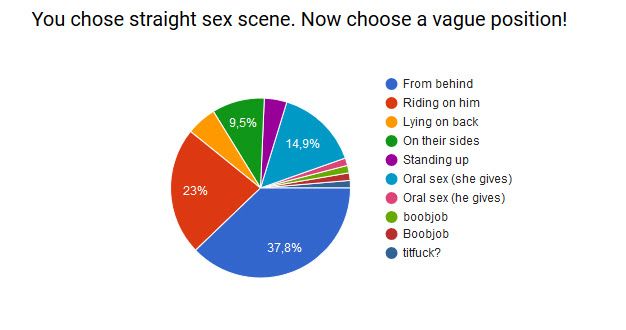 Here we can see that I had fully forgotten about titfucking. 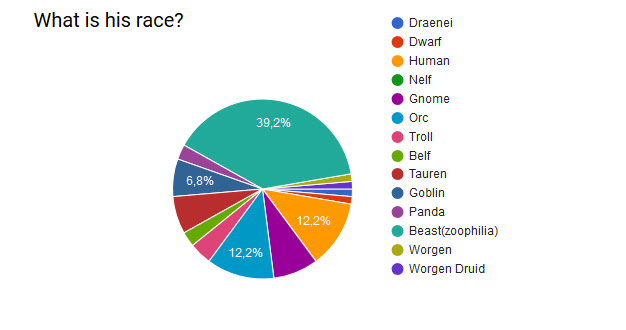 And here we are with the race. As it can clearly be seen, "beast" did get the most votes.
I might have added too many races to chose from in the begin with.
But if it wasn't for the "beast" choice, Human and Orc would have shared the victory(or who knows). 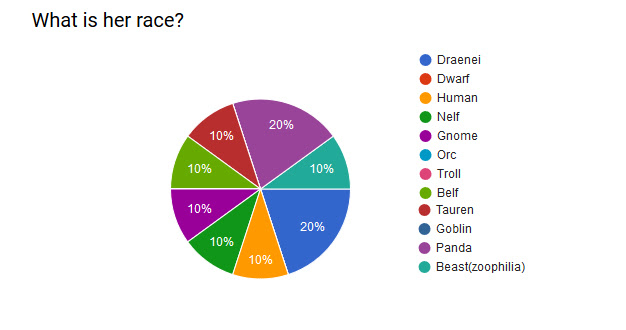 And here's the lesbian result just to give a nice contrast - the animals did get some votes here as well.
klo June 12, 2017 No comments:

The survey is over(has been since Friday) and the picture has been finished.
This was a rather fun little thing and I learned a lot from it. Next time I'll make a survey like this one, I'll make it much broader and involved. It was quite close call what would "win". In the end, Daeatril did get the most votes and heterosexual banging vast majority when it came to the type of picture. Same was with what race she would share her picture with. Or well, it wasn't actually a race - but a fetish.
Thank you to all who took part of the survey.

11th June "Pinned Down by a Noble Beast"[Nelf/Beast/Straight]

On her way to Nighthaven to report of her latest
performance with the Winterspring Furbolgs,
Daeatril came across with an old friend. A large
Hippogryph, that she had befriended with during
her druidic training. Joyous of the meeting, she
wanted to share a warm moment with her dear friend.​
klo June 11, 2017 No comments:

Time for a suprise survey, where you'll help me form the next picture!

A Visit By a Dapper Gentleman

Once again, summer is here! At least up here in north(kind of).
But the never ending summer in certain parts of Azeroth just keeps on going.
So let us return there and visit the green forest of Elwynn and a meet a certain human librarian having a day off and reading a new book.

Kia was having a relaxing Sunday at the outskirts of Goldshire.
Reading her new book and enjoying the summer warmth.
Her reading was interrupted when a dapper looking gentleman
arrived and requested to join her company. She agreed.
==XL-Size Edit==​
klo June 04, 2017 4 comments: