I'm a week behind my schedule with this picture - I was quite busy with a lot of things during those weeks.
But here I am again with a new picture and something different yet again.

I've had in mind to do something with the northern giants for a long time, but never got myself into it - until this month! Earlier this month(September), someone had asked from Rexx through tumblr if he ever was going to use Vrykuls in his works. I agreed that using the male is no big deal, but the female Vrykuls have their armours built onto their models - much like how many mobs are. I like a pathetic jester accepted the challenge and here we are now. It took a while(mainly because lot of other reasons than the picture itself) but it is finally done!


PS. I'm painfully slowly fixing my gallery into something more nicer. I finally implanted function that resizes the images into full-size when clicked.
Due to the lack of skill, I have no idea how to make a message to read or flash on top of the "preview" to tell how to make it larger.
klo September 20, 2014 7 comments: 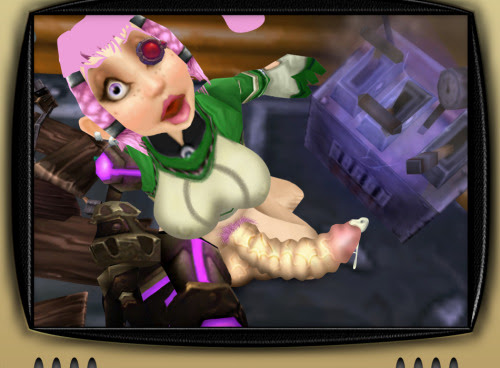 Time for another “WIP” that I never finished. As you can see, the picture is more or less finished - but not fully.
The reason why I never finished/published this picture was that I wasn’t happy with how the penis formed out. It looks goofy, yes, but it was supposed to. The scene supposed be seen through a monitor, following a gnome in radiation filled Gnomeregan.
Lunzuck Lightrod, was an engineer and medic at a ore mine where she was caught in the same cavein as Neffani - the blind dwarven priestess. While the dwarf only lost her sight there, poor Lunzuck lost her right arm and leg, along with her left eye. She agreed into experimental robotic replacements surgery. With her new mechanical limbs and eye, she could do things that others couldn’t and help experimenting her new limbs for future replacements. With the attack to retake Gnomeregan failed, she volunteered in a what some would call a suicide-mission. No one expected how badly the new regios were radiated. But she was soon to learn.

Now wait you might say and I know. Radiation won’t cause but deadly cancers in real world. I know. But I took free hands in this as the world of Azeroth is full of magic and lore-fucking by the devs. And who knows what kind of chain reaction the poison and radiation bomb had effect on experimental gnomish arcane machines etc.
But what’s with the mutated penis? I was trying to make it look like a throbbing tentacle of some sort, but it didn’t turn out any good. So I gave up and sneakly used her in a rep-grinding picture with a Tauren.
klo September 04, 2014 2 comments: